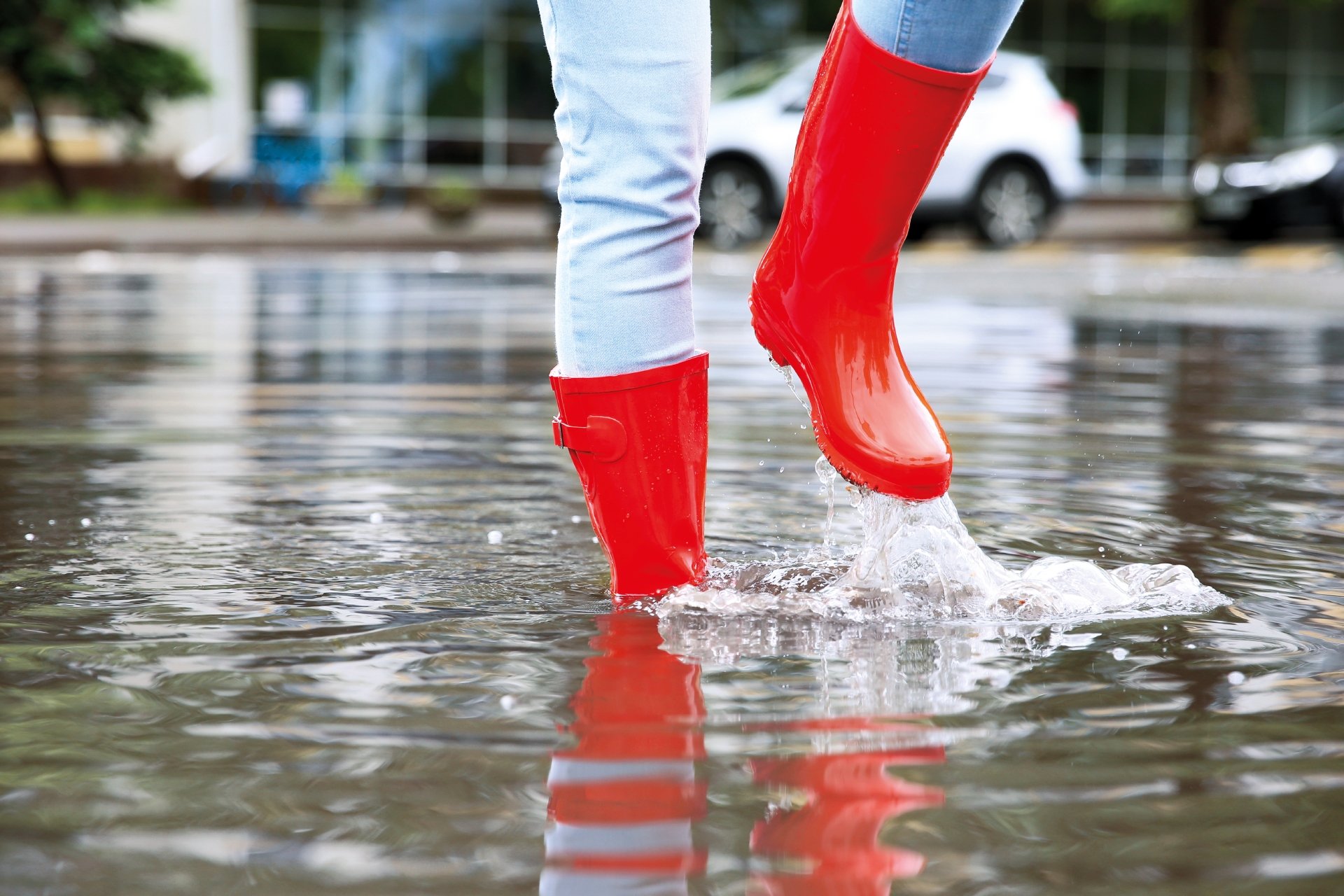 Suddenly the sky darkens and within a very short time torrential rain soaks the earth. Unexpected rainstorms of this kind are becoming more and more frequent. Currently, many cities and municipalities are insufficiently prepared for them however. A negligence that leads to flooding and consequently to great damage to property and people – particularly in cities, due to their dense population and their predominantly sealed surfaces. Experts believe that climate and intensity of heavy rain events. Even today heavy rain causes more damage than any other natural events in many countries. And on top of that, sewage treatment plants are overstrained with the sudden increase in inflow, causing their purification performance to drop. The result: Wastewater pours into the waterways either insufficiently treated or not cleaned at all.

Separate sewer systems and larger pipelines or canals may allow rainwater to drain more quickly, but they still can only represent one part of a more comprehensive solution. The provision of buffer capacities is crucial in order to hold back the surplus water and to discharge it more slowly and systematically, be it simple rain retention basins or large tanks, such as the so-called storm tanks. Contrary to what may be expected, the operation of such storm tanks is robust and demanding, making reliable technology a must.

The Environment, Security and Mobility area of Madrid’s Council has promoted a Plan of Water Quality Improvement in the Manzanares River. The plan includes the construction of 36 storm tanks and more than 34 kilometers of new large-scale collectors. The main objective of the plan is to comply to the existing regulations regarding the quality of the river water.

After long periods of persistent or particularly heavy rainfall, the respective wastewater treatment plants had not been capable of treating the incoming water. After their installation, the storm tanks now hold back the floodwater from the canalization. A fact, that not only protects the city’s wastewater treatment plants (WWTP) by regulating the incoming water masses to match its capacity, the storm tanks are designed to also avoid the direct discharge of wastewater into the river.

The storm tanks act as a buffer, constantly taking in and releasing water. During the loading phase – after heavy rain for example – the rainwater arrives at high speed and with turbulent flow carrying all kinds of solids and garbage while simultaneously cleaning the sewers. Surface waste and harmful matter are sweptaway by the rainwater along with sediments from the system itself. This is a severely contaminated mixture of water, which includes organic materials and fibers such as hair, rags and even small animal bodies. A whole range of non-organic things, among them many hygienic products and other improperly disposed-of garbage such as plastics, toys, shoes and many wet wipes, also reach the storm tank. Despite the installation of screens and grit chambers or other preventive measures, a high quantity of solids still makes its way into the storm tank. Even if the overall dry matter content of the inflow is only 1.5%, heavy parts form sink layers on the tank bottom, while lighter solids accumulate to floating layers. Thereby, after the retained water is discharged, the dry matter content of the remaining sludge can reach up to 10–20%. 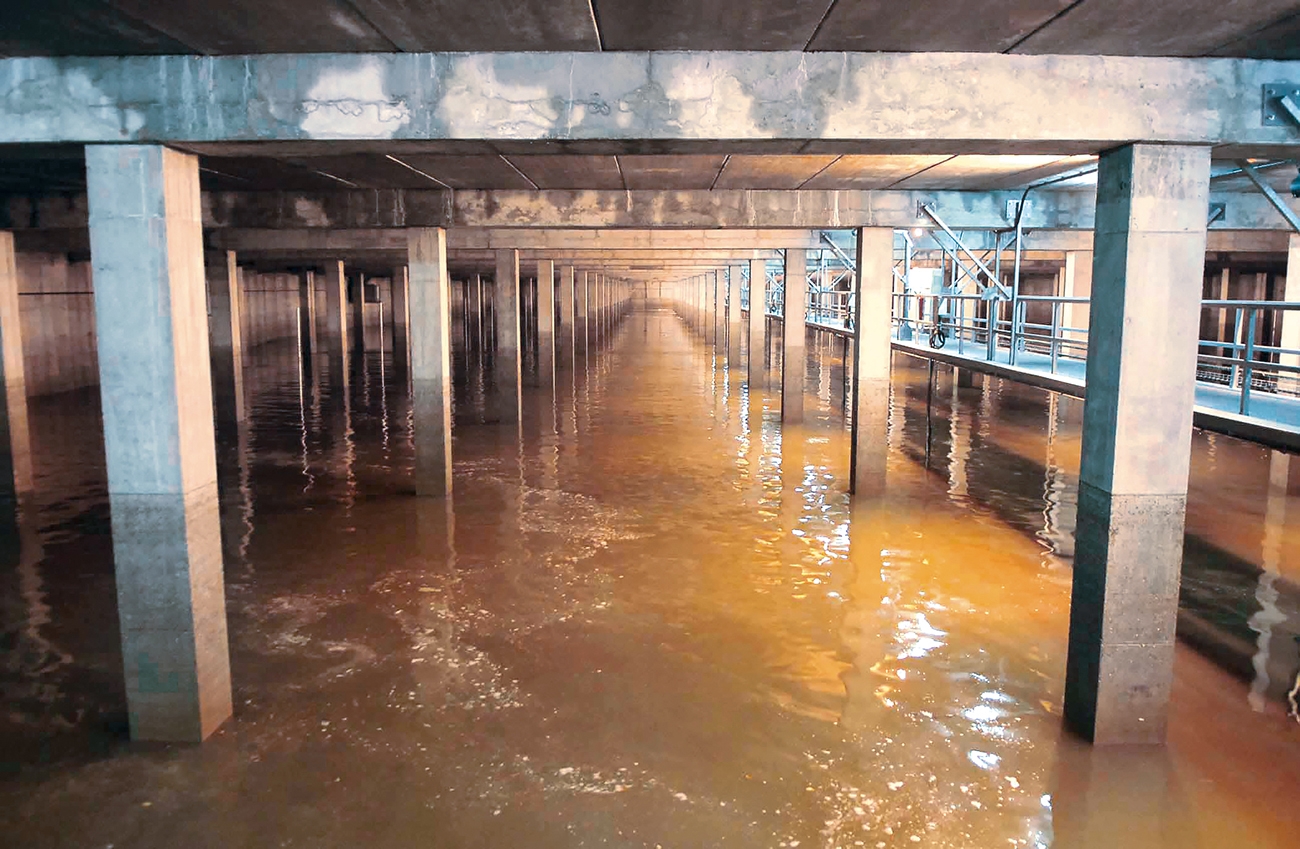 After heavy rain, water is collected in the storm tank and is then controlled released to the sewage
treatment plant for purification.

The operating concept for emptying the tank had already been designed to cope with these special conditions. It is made up of two separate pumping systems. The main pumping system works on its own only up to a certain level of dry matter – a level sufficient for normal operation under regular circumstances. And indeed, there were only a few sporadic blockages in the pumps due to a high quantity of debris and harmful matter..

In case the system reaches a certain water level and thereby a much higher share of dry matter, the operation passes over to the drainage pumps. Whenever the drainage pumps were activated however, many malfunctions occurred. These pumps were unable to extract the sludge. Huge quantities of fibers and rags flowing in the water and layers repeatedly blocked up the installed centrifugal pumps. The responsible IMESAPI Groupe, the storm tank operator, was forced to execute special cleaning and emptying actions in order to avoid malfunctions and maintain the storm tank’s effectiveness.
After analyzing the operation data of the biggest storm tanks in the communities of Madrid (Butarque, Abroñigal, La China and Arroyofresno), IMESAPI Groupe estimated the quantity of sludge at thousands of cubic meters, which needed to be extracted and disposed of each time the tanks were cleaned. Due to the complexity of the process, its internal subdivision and the difficult access to the system, each of these extractions poses an extraordinary effort regarding mechanical and human resources – a burden too stressful for the operator in the long run.

Looking for an alternative solution, a pilot test was run at the Abroñigal storm tank. More than satisfied with the result, IMESAPI Groupe decided to install the tested Vogelsang equipment in the Butarque storm tank. This tank is located in the south of Madrid. It was built in 2006–2010 to collect the rainwater from the Manzanares River’s right riverbank and has a storage capacity of 400,000 m3 making it the fourth-biggest storm tank in the world. 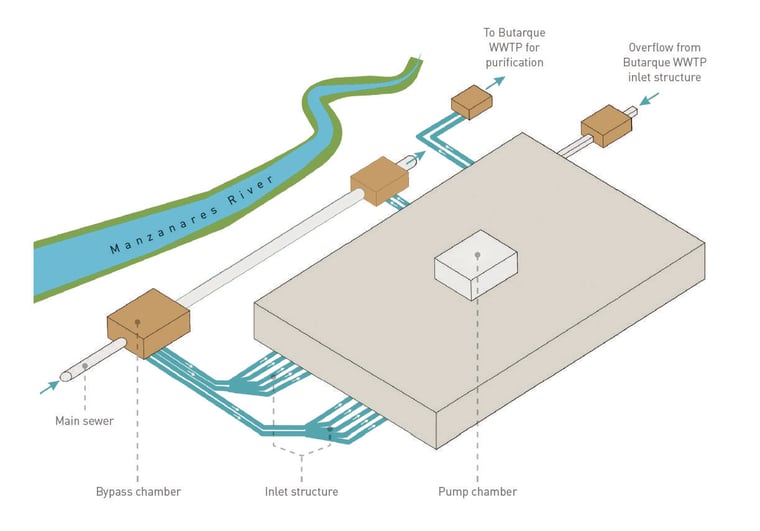 Principle of the Butarque: Storm tank In heavy rain, the water is led from the bypass chamber into the storm tank, which is later released to the sewage treatment plant for purification. The Vogelsang pump system for drainage is installed in the pump chamber together with the rest of the pumping technology.

Vogelsang delivered a special pump system for the drainage of the Butarque storm tank, including a VX186-260Q rotary lobe pump and a RCX-58G Inline RotaCut macerator, both of which are connected to each other in a particular way. As the rotary lobe pump is able to prime the sludge by creating a vacuum, it was possible to install the system in dry conditions in the pump chamber. It is designed for a capacity of 55–220 m3/h and a pressure of 3 bar being able to pump very viscous fluids, even sludge with a high fiber and solids content. 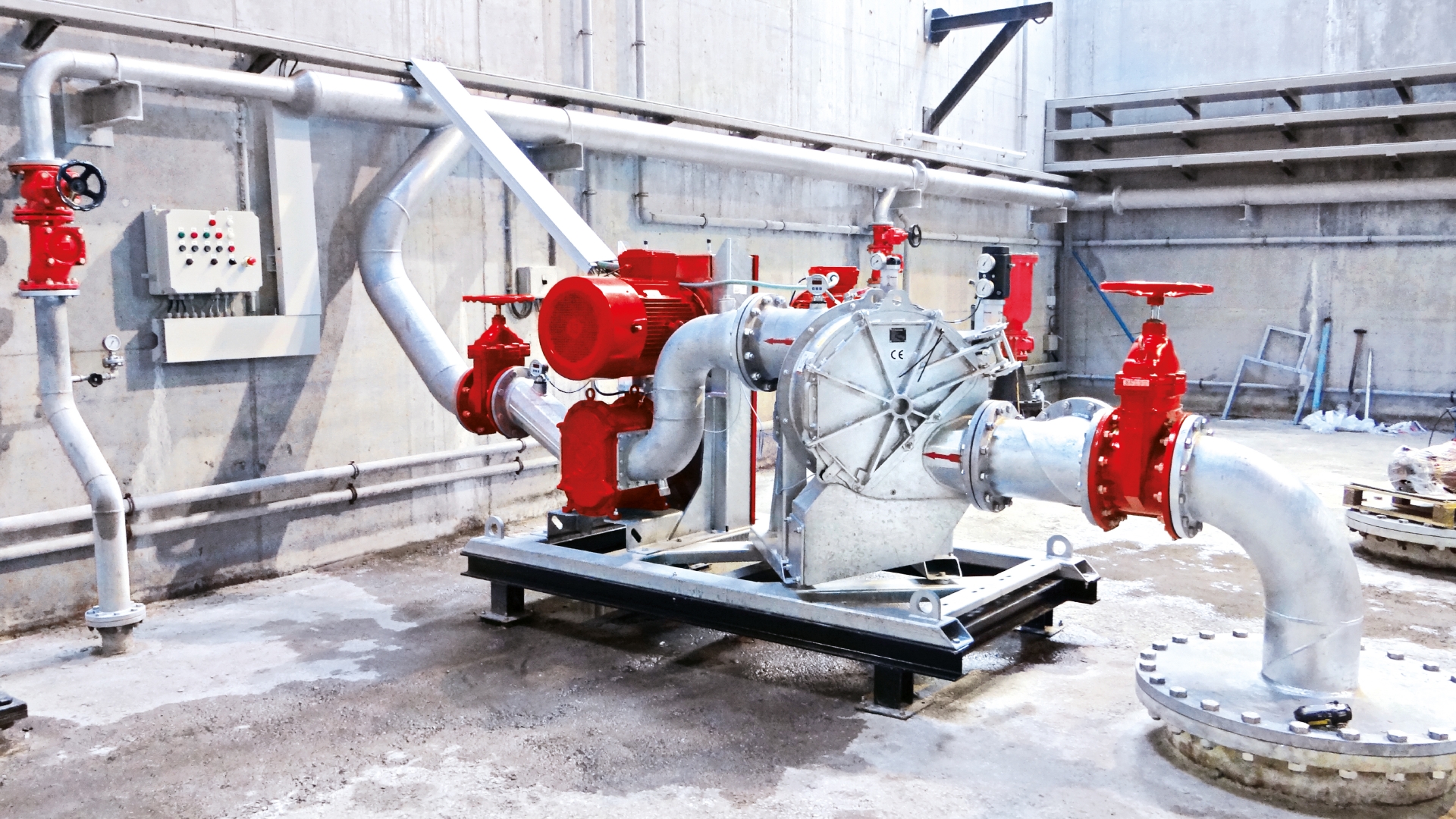 Before the contents enter the pump, the sludge passes through the macerator where stones and metal pieces are separated by gravity while fibers and rags are chopped down efficiently. This protects the pump and the rest of the installation against damages and blockages. The control unit is installed in the main control room of the storm tank, monitoring and analyzing process variables in real time and adapting the operation strategy to the respective condition instantly. Thanks to this specific equipment, no more problems marise during the tank-emptying phase.

As a result, the pump system saves IMESAPI Groupe a lot of effort and money. Based upon its estimate, it would have had to clean the Butarque storm tank twice a year to clear away approximately 2,200 cubic meters of sludge each time. In financial terms, this would easily sum up to a minimum of 200,000 euros per year, only for taking the sludge out of the tank. As an additional benefit, the operation and maintenance costs are reduced by approximately 50,000 euros. Overall, the investment has already paid off after the first tank cleaning and the operator is utterly convinced by these results. So it is no wonder there are further developments in progress in cooperation with Vogelsang in order to upgrade other storm tanks in the Madrid community.

All about the segment wastewater

To the blog homepage 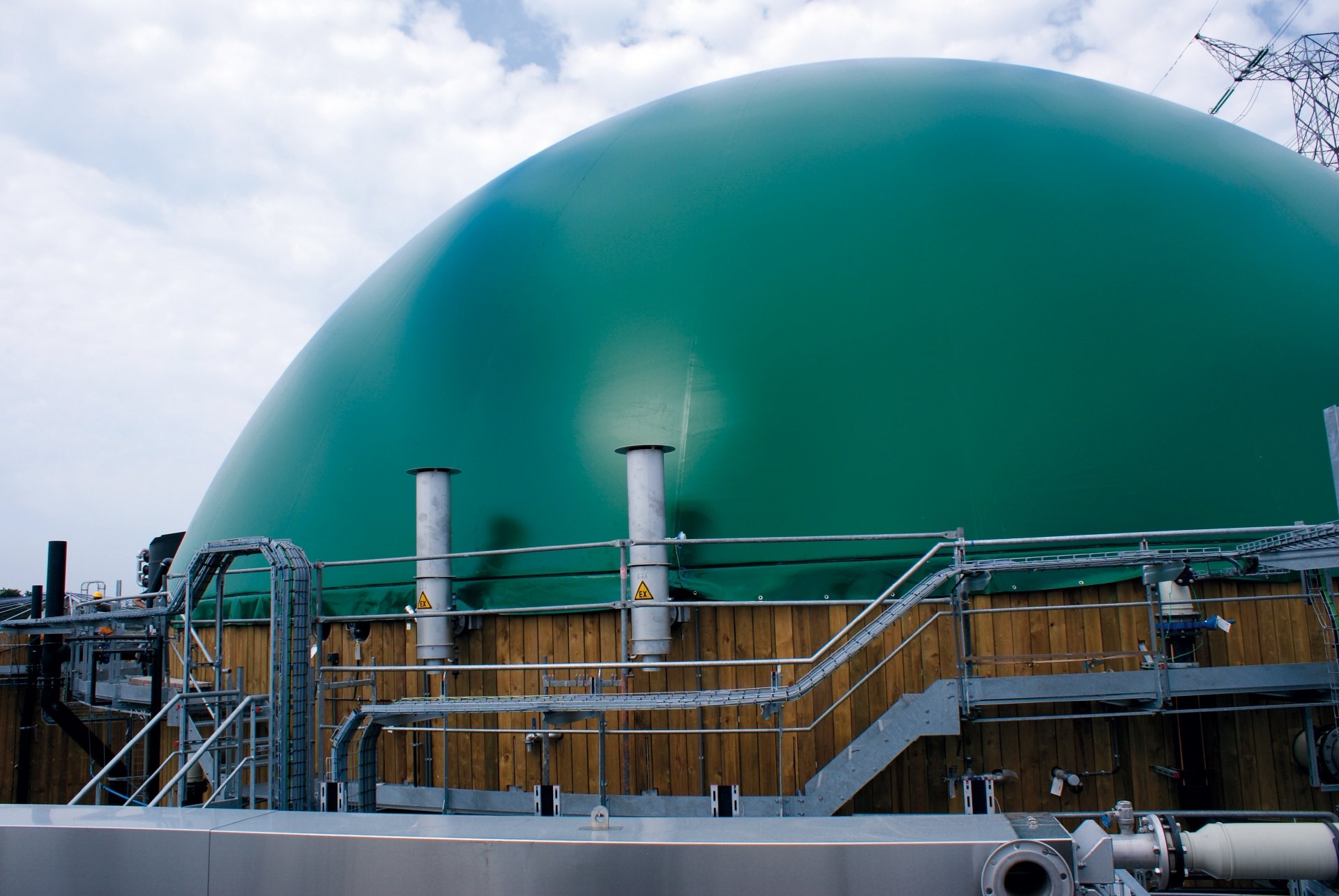 When waste is valuable - the BiogasTec biogas plant in Albertstroom, Belgium

Positive experience of cooperation ensures environmentally compatible and resourcesaving energy and materials. Unnoticed by most, one of the biggest biogas plants that... 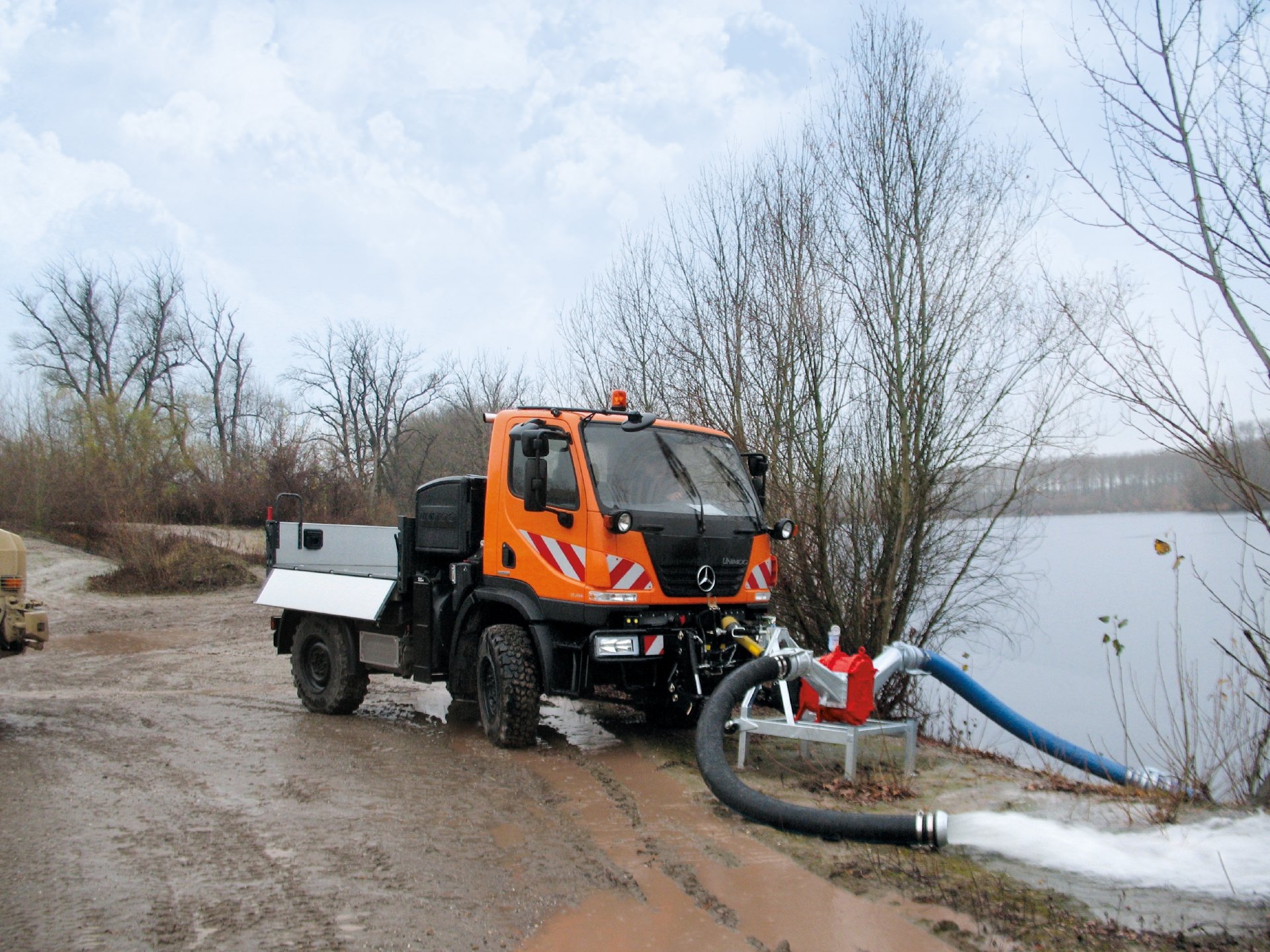 In an emergency, when flood waters have flooded streets, basements and apartments, mobile pump power is required. And rescue workers and helpers must be able to rely on...