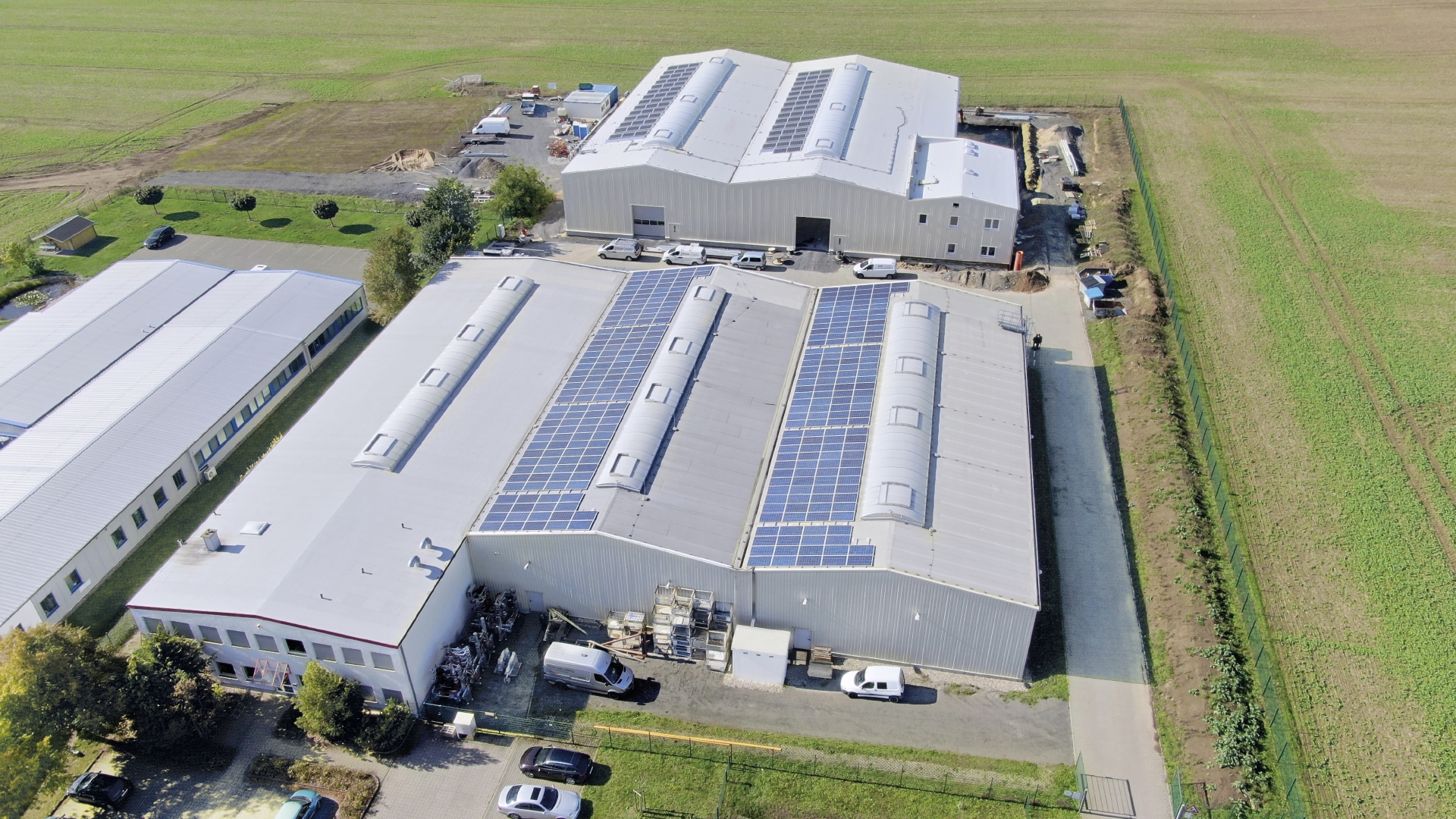 November 11, 1991 in the Rothenschirmbach industrial area: The starting signal has been given for the construction of the branch. Vogelsang has acquired the property for its second German site.

At Vogelsang's plant in Rothenschirmbach, a borough of Eisleben, the town of Luther in the Mansfeld-Südharz district in Saxony-Anhalt, 44 employees now work in the work preparation, production, service and plant engineering departments. The focus is on the area of agricultural technology. At the branch, employees manufacture the entire range of dribble bar and trailing shoe systems for liquid manure spreading, for example the SwingMax dribble hose linkage with a working width of 36 meters. “Our branch specializes in steel construction work for liquid manure spreading and distribution technology. Many of our customers are farmers and contractors from the Saxony-Anhalt region and Central Germany in general,” says Dietmar Köhler, head of the Rothenschirmbach branch and sales engineer. And Koehler continues: "We offer them a regional service site and, in close cooperation with the Essen headquarters, high technical quality and service."

The idea for a branch came up 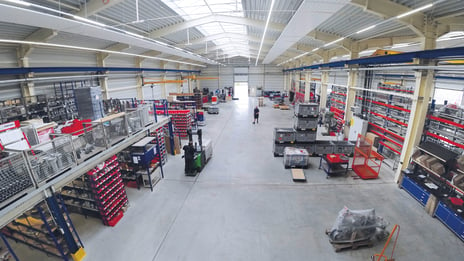 After the border was opened in 1989, the East German market offered great potential for Vogelsang products. There were three main reasons for the company to invest in a second German site: the great importance of agriculture in the East, the increasing demand for services for the products used by Vogelsang and customer support on site. Furthermore, there was still no pump that worked according to the fluid principle of the rotary lobe pump in the former GDR at this time. Wolfgang Jakob, founder of the Rothenschirmbach branch and its former head, therefore looked for investors in East Germany and possible areas of application for the rotary lobe pump. In spring 1993 the plant was officially opened.

„The great commitment of the employees contributes significantly to our good service“
Dietmar Köhler, Manager of the Rothenschirmbach Branch and Sales Engineer

Expert in every segment

The service department in Rothenschirmbach provides a broad range of services and looks after customers from the greater Central Germany area in the areas of waste water technology, biogas technology and transport technology as well as in industrial applications in addition to the agricultural segment. The trained staff at the branch are very familiar with Vogelsang’s entire product range. “The great commitment of our staff makes a significant contribution to our good service. The geographical location is also an advantage - the short distance to the highway leads us quickly to the customer,” says Köhler.

There is a well-organized flow of information between the work preparation and plant construction departments, the production with welders and locksmiths and blank cutting, in which entire dribble hose systems have been assembled since 2019. The meetings that Köhler holds with the heads of the respective departments contribute to a transparent exchange, as does the contact with the colleagues in Essen.

On a steady path of growth

Only in 2018 did Vogelsang invest more than two million euros in a fourth production hall in Rothenschirmbach, including the machine tools. Since last year, the employees at the site in Saxony-Anhalt are therefore not only able to carry out steel construction work for dribble hose and trailing shoe linkages, but also assemble complete systems. In order to do this work, the Rothenschirmbach staff took part in training and familiarization courses lasting several days at the headquarters in Essen (Oldenburg). 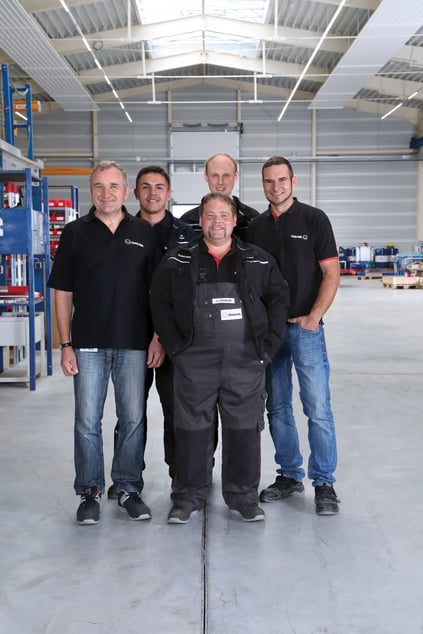 The spatial expansion has spread out the production areas in the individual halls and increased the capacities in the work areas. This in turn has optimized both the work processes and the conditions for the staff. The site in Essen/Oldb. is also benefiting from the new hall, since some of the production at the headquarters was able to be relocated. This has relieved the staff in Lower Saxony considerably. Köhler is planning further projects in cooperation with the management: “We are planning to expand our product range in spreading and distribution technology in terms of the quantity. In the future we would like to produce umbilical application system linkages like the BackPac here too. The same applies to the service capacities in the individual segments, which we also want to expand".

The East branch is also an important location for the people of the region. As an employer and training company - the team has trained about 20 trainees since 1993 - it has enriched the city's industrial estate. Furthermore, Köhler and his team support social projects and associations in which employees are also active. For example, the company donated a VX136-210Q transportable pump with a geared motor and control cabinet to the Osterhausen fire department. The branch also provided financial support for the purchase of non-fiction books to the elementary school in Osterhausen and the renovation of the fire brigade in Rothenschirmbach.

The location has grown from three employees in the first few years to over forty. In the last year alone, six new employees were added. In 2019 the branch received the “Spirit of Enterprise Award”, among other things for its employee retention. “Our 'permanent staff' have been with us for years. That the staff feel so connected to the company is certainly also due to the fact that we have actively involved them in tasks from the very start,” says Köhler and adds: “This also applies to our trainees. And the staff's interest in the work and technology as well as their mutual trust have also been a factor.”

The team also overcame the peak of the Corona crisis together: A transparent action plan helped the employees to easily comply with a hygiene concept and safety distancing. Thanks to the spatial expansions, the staff in the industrial and commercial department were all able to be on site at the same time. The production department, on the other hand, worked separately in early and late shifts. “Thanks to everyone's commitment and flexibility, we were able to meet the deadlines and delivery times. But we are particularly happy that we neither had to put employees on short-time work nor lay them off,” says Köhler to summarize the situation.

"We have taken the right path" 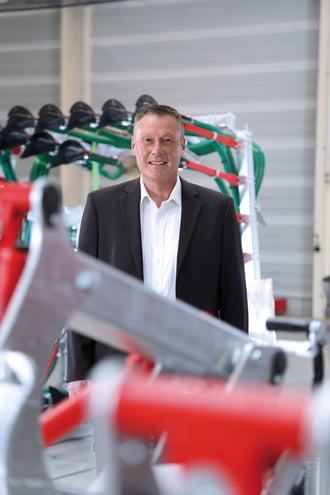 Born in 1961, Dietmar Köhler has been a branch manager and sales engineer at Vogelsang Rothenschirmbach since 2008. The graduate engineer has worked in various positions in the waste water segment for more than 40 years and joined the East German branch in sales in 2002.

Mr. Köhler, which opportunities and challenges does your dual position as sales engineer and branch manager hold?
With my many years of practical experience, I am able to provide our customers with expert advice. As a sales engineer, I get an insight into the technical requirements of customers. That is why, as a branch manager, I am able to assess which technical functions are important to the customers and, as a result, to our branch in discussions with the management at the headquarters. I can therefore easily combine the two positions. Dividing the time correctly for the two jobs can be challenging at times. But since I really enjoy both the strategic and practical areas of the business, I am happy to take on this task.

What have been the highlights of your career at Vogelsang so far?
In addition to being appointed branch manager in 2008, the “Spirit of Enterprise Award” last year was also a special moment for me. The award shows that we are on the right track with our employee management and corporate culture. We are now considered a model company in the district of Mansfeld-Südharz. What has accompanied and inspired me all the time at Vogelsang is the trust the management has placed in our site, which has been deepened by the expansion of our site.

What goals have you and Vogelsang Rothenschirmbach set for the next few years?
We would like to continue building on our previous successes to make Vogelsang even better known. Further strengthening and promoting the team spirit at our site is also important to us, as well as continuing the very good cooperation with the management and the individual departments at the headquarters in Essen.

More articles from our Think Red magazine
Our service department 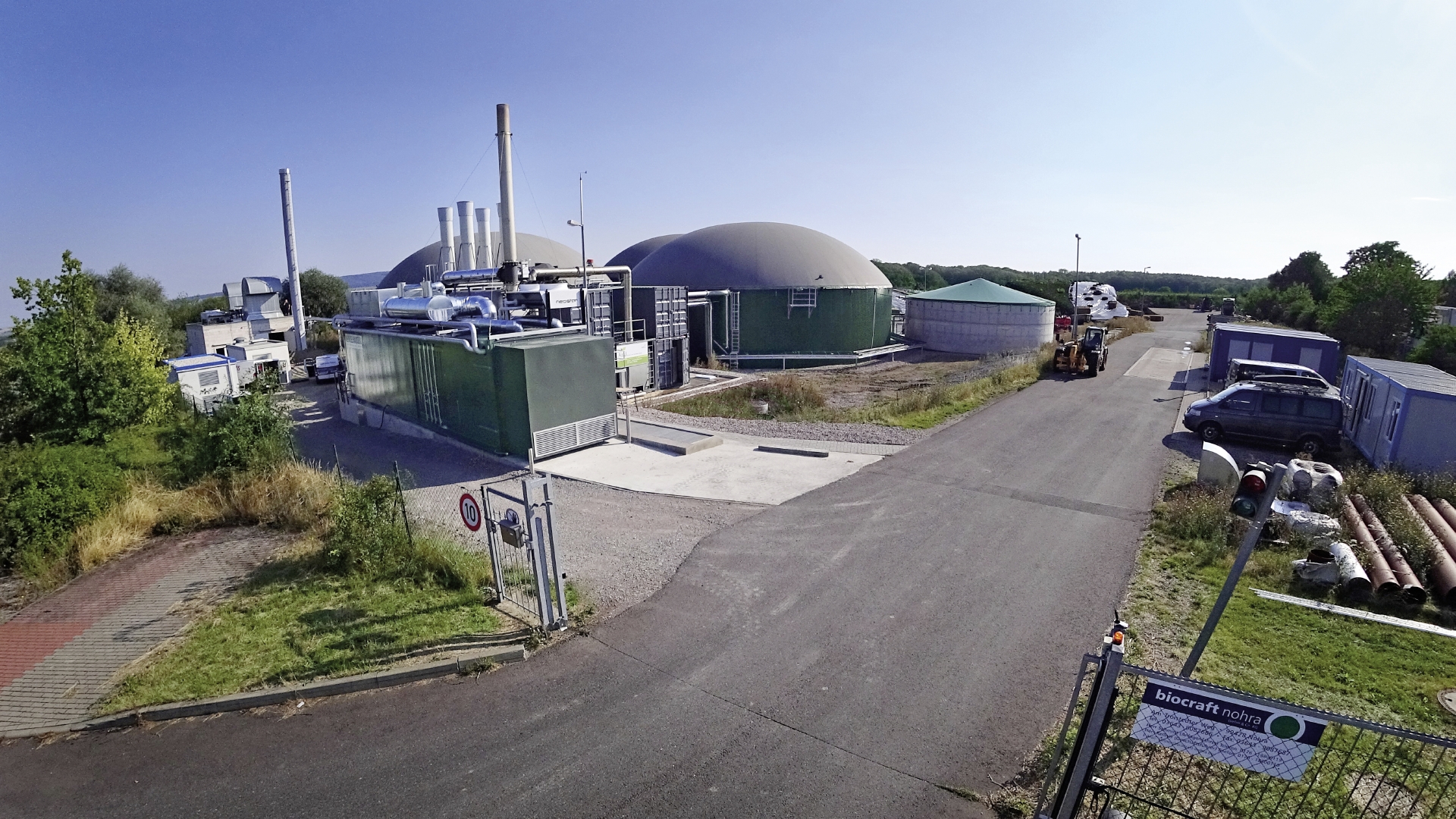 Partnership for plant optimization: In Nohra, Vogelsang and Biocraft Nohra are working with partners from industry and research on the “FlexPump” project – a mixing...

In a field trial, specialists from Ruhe Biogas tested the DisRuptor from Vogelsang on a biogas plant owned by Ruhe Agrar. The...